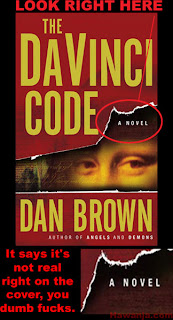 Tonight I was flipping through channels and came across Reverend Peter Popoff, who for those of you who don't know is one of those faith healer Lord-chase-the-devil-out-of-this-person's-bad-kneecaps types. Fun shit with him goes back to being exposed on the Tonight Show for his wife telling him who in the audience needs "healing" via hidden radio transmitter, i.e. this is a guy who's been exposed as a fraud in the past but people still buy into his bullshit. Anyway Reverend Popoff was selling these little plastic vials of (I shit you not) "Miracle Spring Water." He was sitting there with some other sidekick lady person (the kind with screwy hair and fucked up makeup) reading all these testimonial letters about people curing cancer and getting magical bank errors in their favor after drinking it. This kind of shit is pure comedy to me, I can watch it for hours on end. That's why I stopped making fun of Evangelical Christians so much, how can you insult people who believe this shit? Supposedly the water was "free." I was contemplating some kind of scheme where I could set my phone on redial with a tape recorder, so maybe they'd end up sending me enough free miracle water so I could fill up my swimming pool, but then the subject matter changed.

Suddenly Mr. Preacher man switched gears from used car salesman to wrath-of-the-holy-asskicking-lord mode. Apparently The DaVinci code is causing all kinds of trouble with the Christians, like they're insulted by the premise that Jesus got a little nooky. Maybe they're pissed off because they prayed that it would be a failure instead of opening at number one and grossing $175 million dollars. Popoff ranted and raved about the lies and deceptions in the book and how it's the fault of the "liberal secularists" that are destroying our nation (mind you, this asshole was selling magic water five minutes ago.) The sermon ended with him throwing the book to the floor and stomping on it to a standing ovation. I wasn't standing. I was too busy rolling on the floor, trying not to shit my pants with laughter.

This got me thinking, is this book/movie really causing that much of a stir with my favorite comedy religion? I checked a few conservative Christian movie review sites and sure enough all the evangelicals have fallen in line, they hate it, it's blasphemous, the movie sucks, etc. One thing about these people that always amazes me is their ability to do what they're told, without question, without fail. Whoever thought of this religion crap was a genius.

Am I the only person who notices that conservative Christians seem to believe everything they read? What the hell is the problem with you people? It's a novel, it's fiction, it's not true. It's called MAKE BELIEVE, just like that thing you do every night when you pray and pretend your life means something. Nobody thinks it's real but you. Dan Brown said the shit was made up, yet for some reason that's not good enough for you people. Every time there's a book or a movie about Jesus these people act like it's the end of the world when the truth is nobody notices but them. It's fucking lame and it takes up too much of the airwaves.

I like to play video games. But if a movie came out that characterizes all gamers as fat, ugly, evil psychopaths who like to saw off dead animal limbs and fuck each other up the ass with them you wouldn't see me on TV smashing a copy on the movie (maybe if I had some magic water to sell afterwards.) It's because I understand that a movie is just a movie, a book is just a book, and just because some asshole says something with a movie or a book doesn't mean it's true. I know that concept is hard for an Evangelical to understand, since their whole life is based on a book, the Bible (or rather, some rich carpetbagger's interpretation of the Bible that allows him to pilfer these poor saps out of their life savings.)

I know I shouldn't be complaining about people who believe the likes of Peter Popoff, Pat Robertson, or Focus on the Family, because if they had any brains in the first place these people would be out of jobs. But goddammit it's getting obscene.

Let us pray to God now:

"Oh Lord, the most super highest and asskicking of Lords, please give us the strength to lead your stray sheep back into the fold. Please come down with your mighty hand and give them all a backhand to the face, or break your holy foot off in their asses and make them your bitches. And God, ye who is the most highest of all Gods, but better than that, please help us to understand that these people are fucking stupid and help us to stop them from passing all their stupid-ass laws so they won't turn us into an evangelical fascist country. Perhaps you could pour forth from the vial of pestilence a little early, although we know you are saving that vial for the Apocalypse, so maybe just a few drops to give them a horrible venereal disease, or maybe a lot of zits? Or maybe Peter Popoff could wake up one day with a huge fat tick right on the end of his penis, you know, teach the sumbitch a lesson. Oh yeah and please God let there be a remake of Godzilla vs. King Kong without any GC. That would rule."

Amen
Posted by Hawanja at 1:51 AM No comments: Links to this post