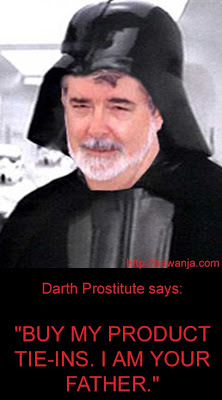 Ok, ok, I saw Star Wars Episode III last night at midnight like a dork. It was good. There's lots of asskicking in it, decapitations, arms and legs getting chopped off, people getting blown up in hideous explosions, etc. Unlike the other two bullshit prequels this one is actually worth the Starwars name. The part where Annakin's whole body just MELTS next to the lava while screaming in undescribable pain is awsome. The whole movie should just have been of Annakin melting for two hours.

So please Mr. Lucas, please cut it out with the endorsements already. Everywhere I go I see fucking Darth Vader on everything. He's on the pizza box. He's on the soda bottle. He's on the lottery tickets. He's hanging out at 7-11. He's breathing next to the scary Burger King serial killer guy. He's doing the Vader-choke on talking M&Ms. He's on a box of Cheez-Its, using the power of the Dark Side to levitate some tasty snacks into his robotic hands: 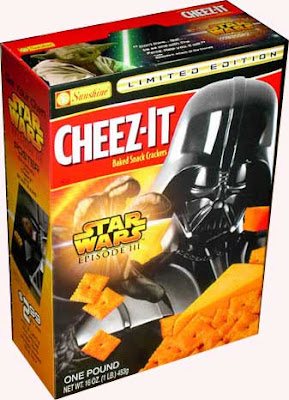 Apparently after a long day of slaughtering children and decapitating sand people, Sith Lords like to retire in the decompression chamber and dig into a tasty bowl of cheese powder tasting squares of starchy vomit crackers. See how mean he looks? He is going fire a load of Cheez-its out of the Death Star at your planet.

Please Mr. Lucas, I know this is the last movie and you're doing the smart thing, milking it for everything it's worth, but please, cut it the fuck out. You win. I saw the movie already. I bought all the fucking action figures. I have the Mace Windu replica lightsaber. I have willingly spend lots of my money on stuff with Darth Vader on it.

But like you said, possesion leads to jelousy, to greed, of the Dark Side are these. So fucking stop whoring out your franchise and rediscover that thing the movie mongols stole from you all those years ago, dignity. You beat them already, you are the most successful independent film maker of all time. Your creation is beloved by millions. You have proved that one man with a vision can win against all odds and show the suits where to stuff it, or whatever. But every one of those Cheez-its cheapens you and your creation that much more. Stop being a fucking whore.
Posted by Hawanja at 1:23 AM No comments: